Launched in 2007, Hong Kong based PureVPN is one of the oldest providers on the VPN scene. It's packed to the gills with features and quite an impressive mix of cybersecurity features at a relatively low cost. So, how does PureVPN stand out? What are the highs and lows of this VPN? Time to see what's under the hood. PureVPN sparked controversy in the past when it revealed a user's IP address to help with an FBI cyberstalking investigation. As a result, PureVPN has revamped its privacy policy to be more transparent and straightforward about how your data is being handled. Their privacy policy strictly stresses that PureVPN doesn't store logs or records that would identify you, such as your original IP address, your VPN IP address, timestamps, online activity, or DNS requests. The only information kept is the details you provide, such as name, payment method, and address. They also track the amount of bandwidth you use, the date you connected to a VPN server and your ISP. Moving on to security, PureVPN uses military-grade 256-bit encryption and supports multiple protocols such as OpenVPN, SSTP, IKEv2, L2TP, and PPTP to choose from. Important features like a kill switch, as well as DNS, IPv6, and WebRTC leak protection, are also provided to protect your data from exposure. It is also one of the few VPNs (e.g. ExpressVPN) that offers split tunneling, allowing you to control which data you want to tunnel through VPN. In addition, it provides a bunch of add-ons to reinforce your internet security against cyber threats, including port forwarding, dedicated IPs, and DDoS protection. PureVPN boasts a massive network of over 2,000 servers dispersed across more than 140 countries. There are servers optimized for streaming, but it's their Ozone-ready servers that are worth mentioning. These servers automatically block any malicious websites and unwanted ads that may harm your device. Moreover, there are no restrictions on data or speed and P2P is allowed on certain servers. However, despite its claims, PureVPN isn't the fastest VPN out there ' not even compared to other cheaper VPNs, like CyberGhost. You may experience some speed and connection issues. Although PureVPN had problems in the past with bypassing geoblocks, they tweaked their service and solved some restriction problems including Netflix, Hulu, and BBC iPlayer. However, PureVPN still can't work in China and you won't be able to access HBO Go or the ABC network. If you'd like to share your VPN with your household, you can use PureVPN on 5 different devices at the same time. It's also compatible with routers, Smart TVs, and a wide range of platforms such as Windows, Mac, Android, iOS, Linux. There are also extensions for Chrome and Firefox. 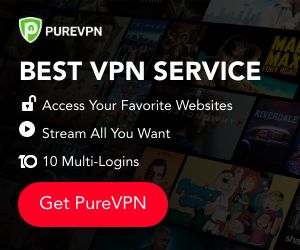